Conducting flute choirs is one of Trisha’s favorite passions. She specializes in modern styles and enjoys pushing the envelope with extended techniques and unexpected repertoire.

Trisha is currently the Flute Choirs Conductor for the Northeast Massachusetts Youth Orchestra, where she leads three ensembles. She has also been the Guest Conductor for Willow Flute Ensemble, Guest Conductor at the White Mountain Flute Conservatory, and has coached flute choirs at schools and festivals throughout New England. 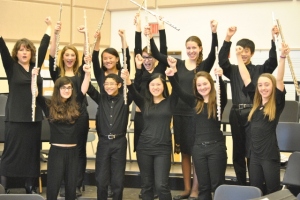 New Englanders even rehearse after a blizzard!